Cycle of Mistrust: Work to Do and Opportunities for New Zealand Institutions 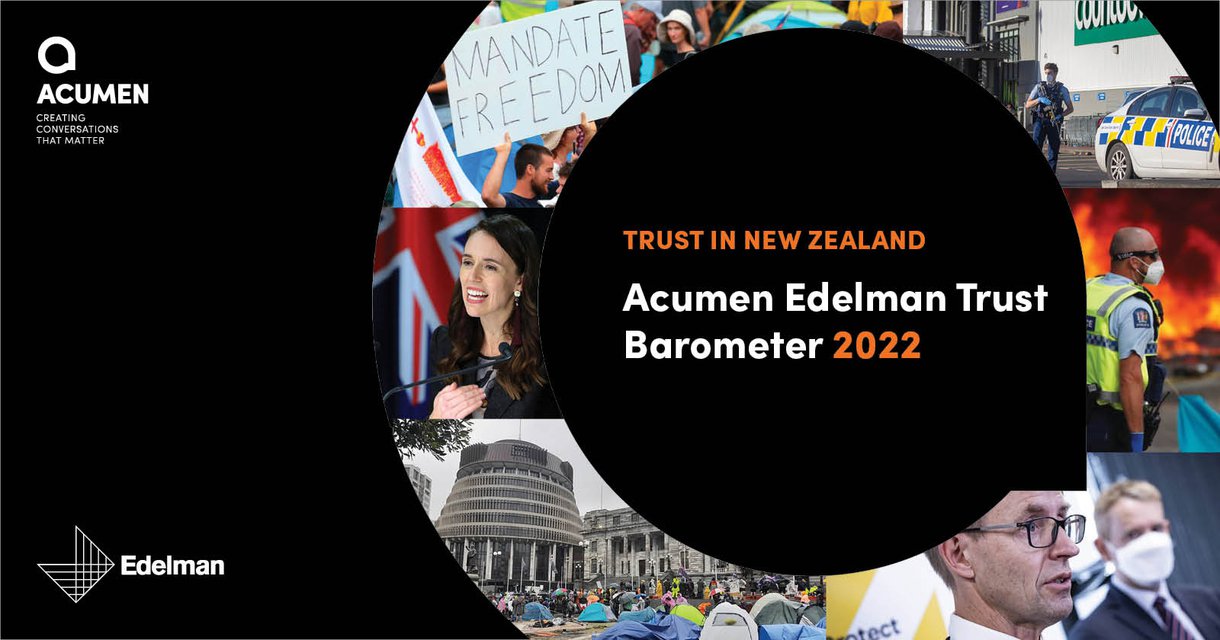 Trust is the glue that creates and fosters stable reciprocal relationships. From intimate and personal to remote and impersonal relationships, trust is a crucial dimension underpinning well-functioning and cohesive societies.

Over its 22-year history, the Edelman Trust Barometer has measured how much we trust key institutions (Business, Government, NGOs and Media) to do the right thing.

Globally, the research shows that two of the four institutions – government and media – are not seen as having met recent challenges well. The rise of populism and disinformation has taken grip over preceding years, fueling a self-reinforcing cycle of mistrust which governments and other institutions have struggled to break.

The global pandemic has placed further acute stress on political systems and their ability to respond effectively, further eroding trust in government. There are system effects in the data. It is notable in the survey that three large federal systems, the United States (-5), Germany (-7) and Australia (-6), all suffered significant declines in trust.

In contrast New Zealand, with its unitary system of government and easy ability to adopt an ‘all of government’ response to the pandemic, bucked the global trend of declining trust in democracies, recording a rise in trust of eight points from 2020, to 57 percent, rated ‘neutral trust’ in the Edelman framework.

Global Trust Declines for Government and Media; Business still the only Trusted Institution

*In the NZ data, comparison is made against 2020 data

Globally, economic pessimism is a key driver of declining trust in democracies, with nine countries at all-time lows. Locally, only 40 percent of New Zealanders believe they and their families will be better off in five years’ time.

Perceptions around Government’s inability to exert leadership and achieve results for their citizens is another worrying dimension driving perceptions of mistrust, although in New Zealand the assertion of leadership is more favourably viewed (53 percent vs 44 percent globally). Nevertheless delivery remains an issue here and abroad.

Media trust globally was down slightly, to 50 percent, while in New Zealand media trust fell eight points from 2020, to 41 percent. The fall points to citizen’s concerns about disinformation and fake news.

No news sources – whether traditional media, search engines, owned and social media – were rated as trustworthy by New Zealanders, who were particularly mistrustful of social media (19 percent vs 37 percent globally), which may well indicate a healthy scepticism about this source of information. Concern about fake news also remains high (70 percent in NZ vs 76 percent globally), reinforcing this last point.

The most trusted institution is business. Business in New Zealand was the only institution that was trusted according to Edelman’s threshold of 60 percent, although Government and NGOs were not far behind. People’s employer is their ‘bastion of trust,’ with New Zealand business recording 80 percent trust, placing it 10th globally.

Amidst the turmoil of a global pandemic, increasing economic insecurity, and rising geo-political tensions, employers are seen as a source of trust and stability.

Employees are also looking to their Chief Executives to visibly discuss public policy with their stakeholders, not to mention speaking publicly about social and political issues they care about.

Business, along with the NGO sector, are viewed in New Zealand as both competent and ethical - a stand-out result when compared to the global position. Results for government and media are less encouraging, yet perceptions of government in New Zealand are comparatively more favourable than held globally. Given the overall results, it is critical that business and NGOs step in and act as stabilising forces to arrest the cycle of mistrust before it, too, becomes endemic.

Get your copy of the 2022 Acumen Edelman Trust Barometer here